Nestlé UK’s Yorkie Is Not For Girls

I saw my first Yorkie bar (made by Nestlé UK) at Butcher Block, an Irish market in Queens, New York, earlier this year. I found its “Not For Girls” declaration, so clear and deliberate on the packaging, too absurd and hilarious to ignore. I bought one. It was amazing, among the best chocolate I’ve had in my life (and as an Official Chocaholic that’s saying a lot). I quickly became hooked.

Eventually, I got more curious about the advertising campaign, which, as an American, I had not been exposed to. Upon researching it online, I discovered that it was apparently not as much of a joke than I thought it had been.

But first, a bit of history.

“Yorkie was launched in 1976 to take on female-targeted brands such as Cadbury’s Dairy Milk and provides a chunkier alternative to the slimmed-down Dairy Milk bars. Consistent early advertising featuring the famous ‘Yorkie Trucker’ had firmly positioning Yorkie as the ‘big and chunky’ chocolate bar for men.” (Marketing Communications)

“There is a standard joke over here [in the UK] that before you can get a heavy goods driving licence you have to show you can unwrap and eat a Yorkie one-handed!” (Monica, Nigella.com)

“Despite Yorkie having a strong positioning as the masculine bar, the representation of masculinity consumers associated with Yorkie was outdated and thus lacked relevance – the issue of relevance being of critical importance in an impulse-driven category such as countline confectionery. This lack of relevance was translated into declining penetration for the brand.

“Thus, in order to ensure Yorkie’s long-term survival in the highly competitive confectionery market, the brand was required to reassert its masculinity in a way that was appealing and motivating for today’s consumer.

Hence, the campaign. Its objective was “to reclaim Yorkie as the chocolate for men.” Its research revealed “key consumer insights”:

“1. Society is moving towards ‘re-genderization’. Beyond feminism and beyond androgyny, people are examining the different values men and women can bring to a society: ‘Vive la différence’. Men love being men – and women appreciate and/or are amused by the differences. Coupled with this is increasing gender equality. PC boundaries have therefore changed and humour is once again exploring ‘men being men’

“2. The rise of feminism has led to a decreased role for men today. The media are constantly reminding us of the increasing success of women in today’s society. Whether it’s better reading ability of girls at primary school or female graduates now getting better degrees than men, the rise of the woman, particularly to men, seems unstoppable. With women now having the gall even to drink pints (of Guinness!), you have to agree with one respondent who said, ‘There aren’t many things a man can look at and say, “that’s for me”.’” (Marketing Communications) 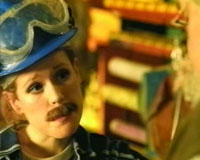 “The tv ads show women attempting to purchase the chunky chocolate bar – but the only way they can do this is by glueing on fake beards, dressing up as builders with hard hats, and swaggering into corner shops asking (in deep, gruff, fake-male voice) for a ‘Yorkie please.’ In one ad, the large, bearded, super-gruff male shopkeeper ‘tests’ the woman to prove she is a man, by quizzing her on stereotypically male questions, thrusting a fake spider in her face to see if she screams, and so on. He finally hands the bar over, but when he tells her th[at] it really highlights the blue in her eyes, she gasps ‘really?’ and he snatches the Yorkie out of her hands and bites off a huge, masculine chunk in one go.”

“The Yorkie ads, on tv and posters, used the slogans ‘It’s not for girls’, ‘don’t feed the birds’, ‘not available in pink’ and ‘King size, not Queen size.’ Interestingly, the campaign even affected the design of the bar itself, seemingly intended to literally stop women buying the bar in the real world. The ‘O’ in Yorkie has been altered into a ‘no go’ road sign, with a line cutting through a woman symbol. The bar also has the phrase ‘not for girls’ on it.” (The F-Word: Contemporary UK Feminism)

In another advertisement, a “four-page Yorkie supplement poked fun at the differences between men and women. The wrap featured a Bill of Male Rights and two definitive lists…”

“Top Ten Things Women Can’t Do
– Make a decision.
– Watch football without talking.
– Drive in a straight line.
– Use ten words when a hundred will do.
– Open a can unaided.
– Use a urinal.
– Own a pet spider.
– Speak on the phone for less than 15 minutes.
– Understand cricket.
– Buy a Yorkie.”

“Top Ten Reasons To Be A Bloke
– One mood – all the time.
– You can go to the bathroom by yourself.
– You get to buy gadgets.
– You don’t have to clean your flat before the cleaner comes.
– Mechanics don’t lie to you.
– You can change a plug.
– Grey hair adds to your sex appeal.
– The first thing you try on in a shop fits you.
– You can read maps.
– You get to eat a Yorkie.” (Metro)

A year later, a limited edition (as in for two months) Pink Yorkie- “for girls”- was released. “The launch is to salute those sacred girls who, against their female instinct, can be ‘BLOKEY’ enough to indulge in the UK’s chunkiest chocolate bar!” (Nestle Rowntree)

Another aspect of the campaign: “Yorkie is to be temporarily renamed Blokie” (FoodAndDrinkEurope).

Yorkie teamed up with Metro magazine in a media stunt, in which “50,000 complimentary Yorkie bars were given out to male Metro readers, who were delighted to get a free chunky bar of Yorkie with their regular copy of Metro.

“Female readers were politely refused a Yorkie bar by Metro’s promotional staff, who apologised and informed them that ‘It’s Not for Girls!’

“Puzzled looks turned to genuine amusement when female Metro readers saw the ad for Yorkie on the front cover – a big No Women sign alongside Yorkie’s slogan.” (Metro)

Not everyone was as “genuinely amused”.

“Nestle Rowntree has been banned by a council from handing out Yorkie bars following complaints that its advertising campaign was sexist.

“Representatives from the firm were handing out Yorkies to men only in Liverpool city centre when a female council worker made an official complaint.”

“‘The Yorkie team applied to give samples, but they did not inform us they would only give them to men,’ said a Liverpool City Council spokesman.

“‘We think Yorkie bars should be for girls as well so we asked them if they would mind not discriminating and give them to everyone. They refused and we asked them to leave.’

“Yorkie brand manager Tomas Vesely said: ‘The campaign is meant to be tongue-in-cheek. However it seems Liverpool City Council does not understand this and has banned us.’” (Ananova)

A sticker campaign has proven popular, with the company “distributing a collection of Yorkie ‘not for girls’ stickers within FHM [a men’s magazine]. The stickers are designed for objects such TV remote controls, car keys, bottles of lager…etc etc. Apparently they are being widely used :-)

“Whilst this time of campaign would probably die elsewhere, us Brits find it bloody funny. Our whole culture revolves around personal attack type banter. This campaign taps into that, to the point that the “not for girls” theme is becoming cult…oh and sales of Yorkie have gone through the roof. :-)” (MarketingVOX)

The FHM ad was headlined “Size Matters” and then: “Of course it does – if you’re talking about huge, chunky chocolate bars, and not the rubbishy sex stuff your girlfriend’s been reading about in women’s magazines… So men, it’s time to reclaim what’s rightly ours. Chocolate for a start: we want a man-bar like a Yorkie, not a puny girl-sized thing… Listen girls – that crinkly, papery stuff your bosses give you in return for a week’s ‘work’: it’s for paying bills, buying essential foodstuffs (like a nice Yorkie for your boyfriend – get a friend to help you carry it)…”

A formal complaint was lodged by Advertising Standards Authority (ASA), stating that “the advertisement feature was offensive because its main purpose was to degrade women.”

In response, “The advertisers said the campaign was designed to explore and to celebrate gender differences in a tongue-in-cheek way. They said the feature in FHM appeared only in that magazine and was written by FHM staff writers to give it the feel of typical FHM copy and to appeal to their target audience of men between the ages of 18 and 35. They argued that all scenarios described in the feature were extreme, were unlikely to happen in real life and were written with an element of fantasy that was not meant to be taken seriously.” (Adjudications)

Following are two examples of the feminist community’s response.

“To give another example of the instability within sexism at the moment, we might consider the television advertisements for Yorkie chocolate bars… If this [tv] advert had been shown in the 1980s, the feminist response would have been clear; classifying the product as ‘not for girls’, suggesting that women are not ‘man enough’ to eat large chunks of chocolate would have been seen as sexist. But this advert is playing with stereotypes; the woman is not disguised convincingly as a man; the advertisement ridicules men as much as women, suggesting that men are obsessed with football and sex. So if we laugh at this advert because we think it is ironising sexism, we could be seen to be buying into sexism, i.e. rejecting femininity and valuing masculinity, or if we don’t laugh at the advert and take it as sexist, we could be seen as humourless and unable to see the overt playfulness and critique in the advert.” (Third Wave Feminist Linguistics)

“Post feminism has also led to the return of sexism in advertising… on the basis that it is ‘ironic’ because women are no longer oppressed. Possibly the worst example is Yorkie chocolate’s ‘It’s not for girls’ slogan. When you consider that gender stereotypes are still encouraged from a young age… the marketing of a product like chocolate, largely consumed by kids, with such a blatantly oppressive slogan is about as funny as a burning orphanage !” (Sexism: A Dialectical Analysis)

Andrew Harrison, Nestlé’s marketing director, has said a few words on the subject.

“Most men these days feel as if the world is changing around them and it has become less and less politically correct to have anything that is only for males.

“It used to be that men had some areas of their life that were just for them and that was OK. No one cared and most people recognised that men needed places to be, in a simple sense, men.

“Yorkie feels that this is an important element of men’s happiness and is starting the reclaiming process of making a particular chocolate just for men.” (The Guardian)

“We’re not saying Yorkie is ‘not for girls’ to be offensive but to let the British male know that we are for him alone.

“Women Yorkie eaters can switch to an Aero or Little Rolo if they like, Yorkie’s feelings won’t be hurt.” (Ananova)

Oh yea, did I mention that “sales of the chocolate bar [have] rise[n] by 30 per cent, despite being banned from shops in Birmingham and Liverpool for being too sexist”? (Ananova)

OTHER LINKS FOR DISCUSSION

SOME IMAGES STOLEN FROM

This entry was posted in Best of the Missives, Culture, Politics. Bookmark the permalink.

48 responses to “Nestlé UK’s Yorkie Is Not For Girls”